I attended an undergraduate program that had a heavy emphasis on field experiences. It was one of the things that really hooked me on geology. I was drawn to the sense of discovery – traveling to see new places, exploring the natural world and unlocking the mysteries of the Earth. I knew from my first geology course it was where I belonged. But just before the final year of my Master’s program, on the night of our annual geoscience banquet, I had a near-fatal encounter with a drunk driver. I was gradually put back together through 6 reconstructive surgeries and was using a wheelchair when I returned to campus. The entire geology department was amazingly supportive – it would take up this entire post if I went in to the details of all the ways faculty, staff and students supported me. My advisors offered to help me re-work my thesis so I would not have to do my last round of field work, but after expressing how adamantly I wanted to finish the project I had worked so hard on, they supported me in finding creative ways to make it work. That attitude of inclusion from my department meant so much to me even though I personally felt like my time in geology was at an end.
Ok, pause the story. Why did I feel like having a disability was a death sentence for a geology career when everyone was being so supportive? I’ve given this a lot of thought and have identified three things that contributed to that mindset. First, my academic experiences in geology up to that point had relied heavily on physical ability. In my time as a student I had heard judgments from both students and instructors about who was or wasn’t cut out to be a geologist based on physical ability. At that point, it was unclear how well I would be able to walk, let alone hike when all was said and done. Second, I had witnessed how important the social connections made outside the classroom were to success – from finding study partners & friends to securing recommendation letters and research opportunities. Many important connections happened in the field and I felt like I had lost access to one of the most fundamental parts of being a geologist. Third, I had no role models. Women were underrepresented, and I had never heard of any geologist with a significant physical disability – male or female. I am not calling out this particular department for any of these things, and in fact, these issues initiated some good discussions about the culture of the geosciences and how it may act as a barrier to a significant part of the population.

Wait – the geosciences have a culture? Absolutely. Geology is a highly social discipline that puts significant cultural value on experiences that happen outside of the classroom (Streule & Craig, 2016). Geologists have an image of themselves as able-bodied, physically fit, rugged explorers of the wilderness (e.g. Bracken & Mawdsley, 2004). This image is integral to our identity as geoscientists (Boss, 2017), yet far from the experiences of large portions of the population (see Why Don’t the Geosciences have More Diversity?, and Bad Things Happen In the Woods). A recent study found there is widespread belief amongst geoscientists that physical ability, especially in the field, is crucial for a successful geoscience career (Atchison & Libarkin, 2016). This despite that fact that many modern geoscience jobs require little to no field work or extreme physical tasks! In other words, You can be a great scientist without being able to carry a 50 pound backpack out of a cave.

Ok, back to the story. Fast-forward through seven years of rehab, surgeries, and adjuncting at a community college. I re-learned to walk with a mangled leg quite well, but with permanent limitations in physical ability and endurance. As my strength returned, so did my drive to get back on the path I had always felt I should to be on. When the opportunity presented itself, I moved to another state and began a PhD program in Geoscience Education. I was thrilled to be back in a research environment and took every field research opportunity that came my way. During the first few trips, I would often push myself too far trying to participate at the same physical level as everyone else, which often resulted in me sitting on a rock in the middle of nowhere nursing a swollen leg and bruised ego. Eventually, I got better accepting my own limitations in difficult terrains, and better at having conversations with my instructors about those limitations.

Pause the story again. Why didn’t I ask to be excused from required field work? It seems like a simple solution, but it isn’t. Besides the academic and skill-building benefits, high-impact activities such as field research play an important role in network building and social/cultural/professional connections to a person’s field of study (Finley & McNair, 2013; Stokes & Boyle, 2009; Streule & Craig, 2016). Experiences outside the classroom can have a significant impact on a student’s overall success, confidence, and sense of belonging. All of those are good reasons to participate! However, some students choose not to participate in geoscience activities outside the classroom where disabilities become more apparent and more vulnerable to social stigma (Hall, Healey, & Harrison, 2002; Healey, Roberts, Jenkins, & Leach, 2002). For students with disabilities, decisions regarding participation are made by weighing out the potential educational benefits versus the potential social drawbacks from negative reactions to their disability. Personally, I knew that some of the more physically rigorous activities – like climbing a steep volcanic slope -would not be possible, but there was still a great deal of data collection and research that would occur in the places I could reach. For me, the benefits of participation outweighed the potential drawbacks.

Fast forward a few more years to the present. I recently completed my PhD including multiple field projects in volcanology and geophysics in a variety of landscapes. For the past two years I have been a researcher on a multi-year project specifically targeted at dismantling the barriers to participation of students with disabilities in geoscience field work. This would not have been possible without finding a team of instructors and fellow students that were willing to work with me in approaching field work in a more inclusive way. For students or faculty who wish to include more students with diverse abilities in field work, I offer a few suggestions as a starting point:

Disability is an important yet often overlooked aspect of diversity inclusion. Barriers to inclusion for individuals with disabilities impact members of every other underrepresented group that we are so sorely missing in the geosciences! Roughly 1 in 5 Americans identifies as having a disability according to the US census bureau, but because many disabilities are non-apparent, we tend to dramatically underestimate the numbers of those with disabilities we encounter every day. There are numerous barriers to participation in the geosciences including institutional barriers in the form of discriminatory policies and environmental barriers found in laboratories, field trips and course materials (Carabajal, Marshall, & Atchison, 2017). But the most challenging barriers to dismantle are often cultural. A quote from a recent paper about disability inclusion in science summarizes the mindset that underpins these cultural barriers quite well:

The impact of these cultural issues goes beyond students registered with Disability Services. Many individuals who do not require formal accommodation on campus have disabilities or medical conditions that prevent full participation in a physically intensive and geographically remote activity. Changing our culture is a difficult but necessary task, and the only real way we will see significant progress in making the geosciences a discipline where diversity can thrive. 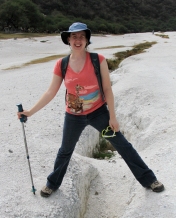 Anita Marshall is a recent graduate of the University of South Florida where she received her PhD in Geoscience Education with a focus on broadening participation for individuals with disabilities in field work settings. She currently volunteers on the board of the non-profit International Association for Geoscience Diversity where she serves as a mentor and advocate for geoscience students with disabilities.

More tips on creating inclusive field environments can be found on the AdvanceGEO website.

For resources relating specifically to disability inclusion in all aspects of the geosciences, The International Association for Geoscience Diversity is a 5013c that provides opportunities, research, training and support. TheIAGD.org, on Facebook, or Twitter @AccessibleGEO.

Boss, S. K. (2017). Recognizing the Culture of Geology as a Primary Barrier to Inclusion. Paper presented at the Geological Society of America, Seattle, WA. https://gsa.confex.com/gsa/2017AM/meetingapp.cgi/Paper/300496

Carabajal, I. G., Marshall, A. M., & Atchison, C. L. (2017). A synthesis of instructional strategies in geoscience education literature that address barriers to inclusion for students with disabilities. Journal of Geoscience Education, 65(4), 531-541.

4 thoughts on “Moving forward: Overcoming our ideas about disability in the Geosciences”