by Terri Cook, Science and travel writer – Down to Earth Science, LLC 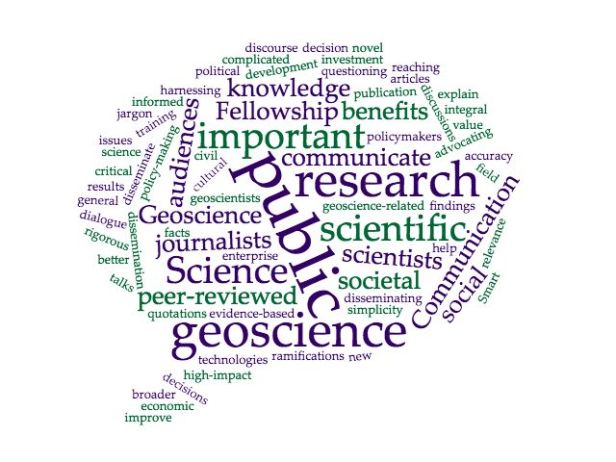 The dissemination of new knowledge is an integral part of the scientific enterprise; regular publication of high-impact, peer-reviewed articles is one of the most important metrics for measuring a scientist’s success. Due to the technical nature of these manuscripts, however, such communication does not typically boost the public’s understanding of the specific study results — or of science in general.

Yet, according to the Science Literacy Project, scientific research and novel technologies “play a major role in key political, economic, cultural and social policy discussions, as well as in public dialogue.” In an age of “alternative facts” and shrinking science budgets, and a time when the U.S. risks losing its edge in research and development, advocating for an evidence-based approach to decision making, which is independent of political views, has become crucial. So too has successfully reaching policymakers and the public, who must wrestle with the science underpinning a host of geoscience-related issues with important societal ramifications, from energy development to procuring mineral resources vital to our national security, in order to make informed decisions.

While there is much that individual scientists can do to disseminate their research and promote civil discourse, including holding public talks, harnessing social media, and writing for popular audiences, these are time-consuming endeavors. In addition, communicating with a lay audience is a skill; it’s easy to become mired in jargon, and there may be gaps between what scientists assume the public knows and what it actually does, according to a 2013 article in the Journal of Undergraduate Neuroscience Education. Plus most scientists, according to that same article, don’t receive any formal training on how to communicate scientific topics to the public, and there is often little incentive to prioritize this.

Science journalists like myself arguably serve an important societal role by disseminating the results of rigorous, peer-reviewed research to broader audiences. “Our common mission,” writes Alison Fromme in The Science Writers’ Handbook, “is to explain very complicated things with both maximum simplicity and maximum accuracy.” A significant part of our job is to ask tough questions. “This critical questioning is important, and what it needs more than anything else is experience,” said BBC News Correspondent Pallab Ghosh in a 2013 panel discussion.

But even as the need for experienced science journalists continues to rise, the number of full-time jobs in this field, as well as the pay rate for freelancers, continues to decrease while the workload has generally increased, according to a 2009 Nature survey. This has led to some alarm. “Independent science coverage is not just endangered, it’s dying,” said science journalist Robert Lee Hotz of the Wall Street Journal.

What then can geoscientists do to help avert what Gosh has called “a crisis in science journalism”? Journalists need honest answers from scientists, including an assessment of a study’s limitations and flaws, as well as its significance, in order to provide a balanced assessment of the research. We also need quotations to help us communicate the relevance and impact of scientists’ findings. One of the easiest ways to acquire the insight and capture the myriad details necessary to write an informative and captivating article is to visit a researcher onsite. In the geosciences, this is often in the field. Yet there is little support for science journalists to do this; few outlets will pay such expenses, especially for freelancers, who account for roughly half the number of science journalists.

To encourage the in-depth understanding of geoscientists’ approaches, research questions, motivations, and findings, the European Geosciences Union (EGU) has established an annual Science Journalism Fellowship that provides funding specifically intended for journalists to visit geoscientists in the field. The annual award of €5000 is typically split between two recipients each year, so since its inception in 2012 a dozen journalists, including myself, have received awards.

While the journalists benefit, so too do the scientists; their research receives wide exposure in prestigious publications, and they are given the luxury of being able to explain the intricacies of their work, such as dating previous motion along major faults in Nepal, and its implications first-hand and directly answering journalists’ questions as they arise.

But I would argue that it’s the general public who benefits the most. During the fellowship’s first four years, the seven recipients produced 18 pieces of science reporting, ranging from blog articles to a book, in a wide variety of outlets that included Nature, Science, Der Tagesspiegel, and EGU’s GeoLog blog. The topics, which are proposed by the journalists, have covered a broad range of geoscience disciplines, from the disastrous historic eruption of Iceland’s Laki volcano and fracking in Europe to my proposal about using dams to unleash artificial floods in order to restore rivers’ ecological integrity.

Recognizing the many potential benefits of better communicating the value of geoscience, the Geological Society of America (with the help of several generous donors) also recently established an annual Science Communication Fellowship.  The intent of this ten-month position is to help improve communication of geoscience knowledge between the members of GSA and the non-scientific community. I hope that other societies will soon follow suit. We are living in a period of unprecedented human influence on climate and the environment; establishing these awards sends a strong signal that geoscience communication is a priority — as well as a smart investment.

Terri Cook is a freelance science and travel writer based in Boulder, Colorado.