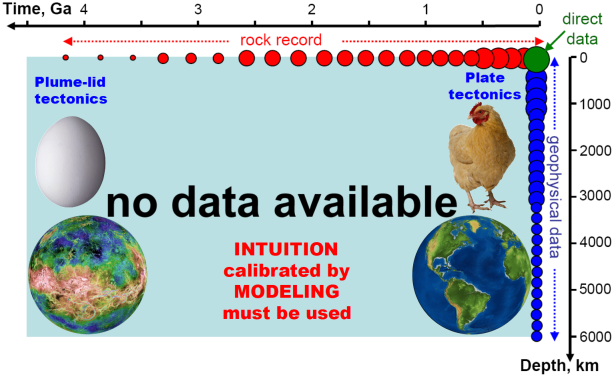 No successful global physics-based geodynamic paradigm yet exists for Earth before plate tectonics due to the scarceness and fundamental unavailability of necessary data (e.g. global picture of the unperturbed Archean Earth interior and surface). Finding modern physical extraterrestrial/extrasolar planetary analogues and developing realistic numerical models of pre-plate tectonic Earth are thus critical for further progress. This blog is aimed to provoke thinking and discussion on that subject. Based on recent geological-geochemical literature and numerical experiments it must be that a distinct Venus-like plume-lid tectonics regime operated on Earth before plate tectonics, which was associated with widespread tectono-magmatic heat and mass exchange between crust and mantle. This regime was characterized by weak internally deforming highly heterogeneous lithosphere, massive juvenile crust production from mantle derived melts, mantle-flows-driven crustal deformation, episodic magma-assisted crustal overturns and widespread development of lithospheric delamination and eclogitic drips. Both proto-continental and proto- oceanic domains formed in this regime by a combination of eclogitic drips and ultra-slow proto-oceanic spreading without deep subduction. Subduction was episodic and short-lived and could have led to rapid global resurfacing of proto-oceanic domains associated with disaggregation and reworking of proto-continental regions. It therefore makes sense to use Venus as the “visible” modern analogue for Archean Earth and combining observations from the two planets underpinned by numerical modeling is a fruitful foundation for reconstructing Earth’s missing global pre-plate tectonic paradigm.

Here, we aim at understanding the evolution of the Earth’s interior and surface over time. A time–depth diagram (Fig. 1) covering the entire Earth’s history and interior schematically represents this evolution. For a systematic characterization of geodynamic relationships, the entire diagram should be “covered” by data points characterizing the physical–chemical state of the Earth at all depths (ranging from 0 to 6000 km), for entire geological time (ranging from 0 to around 4.5 billion years ago). However, the unfortunate fact is that observations for such a systematic coverage are only available along two axes: (A) direct observations for the modern Earth surface structure (B) the geophysical snapshot for the present-day Earth’s interior and (C) the geological record preserved in rocks formed close (typically within few tens of kilometers) to the Earth’s surface. The rest of the diagram is fundamentally devoid of observational data. Not surprisingly, therefore, the topic of early Earth geodynamics remains controversial but fruitful.

The special challenge here is that we do not have a successful physics-based paradigm of global geodynamics and lithosphere tectonics for the early Earth (comparable to modern plate tectonics), which we can validate and elaborate using continually expanding set of observational and analytical data (Benn et al, 2006; Gerya, 2016). One obvious consequence is that in the absence of the paradigm for pre-plate tectonic Earth we will always tend to “overstretch” the successful paradigm of modern plate tectonics back in time. To improve this situation and calibrate our intuition better, numerical modeling should naturally play an ever increasingly important role in developing and testing geodynamic hypotheses based on robust observations aimed at explaining the evolution of the early Earth. Here, we should also recognize critical significance of global Earth’s surface observations for the development of modern plate tectonics paradigm. We can speculate, therefore, that finding and investigating modern extraterrestrial (or even extrasolar) planetary analogue(s) for and developing realistic numerical models of pre-plate tectonic Earth are two critical components for future progress.

Both proto-continental and proto- oceanic domains were formed in this regime by a combination of eclogitic drips and ultra-slow proto-oceanic spreading without subduction (Fig.6). Subduction was episodic and short-lived and could have led to rapid global resurfacing of proto-oceanic domains associated with disaggregation and reworking of proto-continental regions (Fig. 6).

Two distinct phases in coupled crust-mantle evolution are identified (Fisher and Gerya, 2016), which compare well with some Archean granite-greenstone records (Hickman and Van Kranendonk, 2004): (1) A longer (80-100 Myr) and relatively quiet ‘growth phase’ which is marked by growth of crust and lithosphere, Followed by (2) a short (<20 Myr) and catastrophic ‘removal phase’ (Fig. 7), where unstable parts of the crust and mantle lithosphere are removed by eclogitic dripping and later delamination. Modeling thus suggests that the early Earth plume-lid tectonic regime followed a pattern of episodic growth and removal also called episodic overturns with a periodicity of ca. 100 Myr (Fisher and Gerya, 2016; Sizova et al., 2015).

The results of the numerical experiments are thus surprisingly similar to inferred characteristics of Venus surface dynamics, which makes this planet even more attractive analogue for the pre-plate tectonic Earth.  It is worth considering that the huge pulses of crustal growth seen for Earth at 2.7 and 1.9 Ga (Fig. 4 of the previous blog post) are reflections of a Venus-like resurfacing event affecting pre-plate tectonic Earth.

Conclusions. A distinct Venus-like plume-lid tectonics regime must have operated on Earth before plate tectonics. Using Venus as the “visible” modern analogue for Archean Earth and combining observations from two planets based on numerical modeling is a fruitful way of developing the missing global pre-plate tectonic paradigm.

6 thoughts on “What was before plate tectonics?”