I had never really considered myself a student of geoscience. For some reason, that word stirred in me the more conventional images of a rock-enthused geologist or perhaps a lab-coated technician monitoring earthquakes rather than a marine biologist–I had always been firmly camped in the biological life sciences. Perhaps that’s why in all my job searching I had never discovered the National Park Service (NPS) Geoscientists-in-the-Parks (GIP) program and the Geological Society of America (GSA) GeoCorpsTM America program. Fortunately, providence intervened and I found myself in the Biological

Resources Division of the National Park Service, in Fort Collins, CO, listening to a world-renowned bison biologist tell me about the NPS interest in marine wildlife and subsequently applying for their Geoscientist-in-the-Parks position.

I had spent the previous post-collegiate years conducting fieldwork on marine wildlife–studying seabirds in Alaska, sea otters and pinnipeds in California, and right whales in Georgia just to name a few projects. My job duties had been wide-ranging. One day might have entailed using a scat dog to collect fecal samples from an endangered killer whale population, the next month I was tagging sea turtles in Baja California, or cruising the Gulf of Mexico in a plane to monitor species impacted by Deepwater Horizon. While I had visited Colorado, never would I have imagined working here. My heart (and resume) clearly belonged to the oceans.

My GIP project with the National Park Service (NPS) has taken a fine focus to my previous experiences. Tasked with reviewing marine wildlife across all coastal and marine NPS units, much of my day is spent in literature review or in conversations with scientists across the Service. It’s an exciting time to be researching marine stewardship and science as the NPS tackles challenges like climate change, energy development, ocean acidification, fisheries interactions, and marine debris.

The NPS portfolio has some models of legendary marine stewardship and science including the long-term studies on humpback whales at Glacier Bay National Park and Preserve, the groundbreaking reintroduction efforts at Padre Island National Seashore for Kemp’s ridley sea turtles1, and the collaborative pinniped research conducted at Channel Islands National Park between NPS and the National Oceanic and Atmospheric Administration (NOAA).   Marine wildlife often serve as indicator species on the overall health of the coastal and marine ecosystem-declining marine wildlife populations are symptomatic of the deteriorating condition of the ocean environment.

The purpose of NPS management was identified in founding legislation to be “to conserve the scenery and the natural and historic objects and the wild life therein and to provide for the enjoyment of the same in such a manner and by such means as will leave them unimpaired for the enjoyment of future generations” (NPS Organic Act, 16 U.S.C. §1). An assessment compiled by the National Park System Advisory Board in 2012, “Revisiting Leopold”, determined the only way to accomplish the NPS mission was by “stewarding resources for continuous change that is not yet fully understood”–which requires robust scientific study to guide management decisions and facilitate stewardship.   According to the National Ocean Park Stewardship Action Plan, the stewardship of NPS resources through science-based management will “best result from collaboration among federal agencies, states, tribes, citizens, local communities, and academia, when all work to protect a shared ocean heritage”; where terrestrial and marine protected areas share boundaries, whether they be parks, sanctuaries, or state reserves, unique opportunities exist to connect conservation corridors into a network, adding to their individual and collective resilience over time.

My project has been utilizing multiple data sets to examine what marine mammal and marine reptile species occur in the 80 coastal and marine National Park units. Through discussions with park and region personnel, I’m looking into what sorts of management and research are being done with marine wildlife species in parks and identifying where opportunities exist to expand stewardship and science. And it’s not over yet – I’ll be continuing to work with the Biological Resources Division to draft a technical report of my findings and assist in coordinating a workshop on marine wildlife concerns within NPS. The National Park Service turns 100 on August 25, 2016–what better way to celebrate then by undertaking a Service-wide review of marine wildlife, an endeavor which has not yet been attempted.

One of the best experiences of my tenure was the chance to attend The Society for Marine Mammalogy (SMM) Conference in San Francisco, CA. For any marine mammal nerd, this is the extravaganza to attend – the legendary researchers and lead authors of your favorite scientific papers are walking around in the flesh. While this was the largest conference to-date, the field of marine mammal science is still relatively small and young compared to other scientific fields, which means that some of today’s well-accepted and utilized techniques were pioneered by folks spearheading this conference.

It was a great opportunity to meet NPS researchers and collaborators who presented their work on humpback whales and harbor seals in Alaska, elephant seals in California, and grey seals in Massachusetts. Researchers from around the globe presented landmark achievements in the field of marine mammal science, many of which involved innovative technology and multi-national collaborations. The Society awarded the first ever Conservation Merit Prize to Mexico in recognition of the collaborative effort of the Mexican government, scientists, World Wildlife Fund–Mexico, and local fishermen to conserve the critically endangered vaquita—a rare species of porpoise that lives solely in the Gulf of California, Mexico. I attended an all-day workshop on pinniped disentanglement, looking at the global problem of pinniped entanglement in marine debris and fishery gear, methods of prevention, and techniques for rescue and gear removal. Improving removal techniques and studying entanglements to reduce incidences becomes particularly important for imperiled species like the endangered Hawaiian monk seal.

During my time in California, I was able to do a site visit to a special protected area-Año Nuevo State Park-which in addition to being a California State Preserve is also a National Natural Landmark site. Año Nuevo is one of the largest mainland breeding colonies for Northern elephant seals. Research is conducted by the University of California Santa Cruz and NOAA on elephant seal population dynamics, health, behavior, and physiology. During the breeding season, tours are carefully conducted by trained docents, to minimize disturbance to the seals while still allowing wildlife viewing. The first pup of the season had been born just days before our arrival, but mom and pup were tucked away on the beach and not visible from the viewing platform. I did see quite a few adult and subadult males mock fighting, as well as snoozing away on the warm sand.

How Geoscience and Marine Biology Work Together

For those interested in a career as a marine biologist or marine mammal scientist, I strongly recommend gaining practical skills through internships or positions like those offered through Geoscientists-in-the-Parks and GeoCorps America. Field projects often involve small teams deployed remotely–be sure you know how to use computer and photography equipment, learn how to troubleshoot a truck or boat engine, or become a savant at tinkering–the marine environment is brutal on equipment and something always needs repair. Be sure to take courses in statistics, database management, Geographic Information Systems (GIS), and a variety of sciences (ecology, physiology, animal behavior, botany, physics, and chemistry)–even if you aren’t interested in them, many graduate schools or federal positions require such coursework and having an understanding of multiple disciplines can come into play when looking at complicated issues like ocean health or climate change. 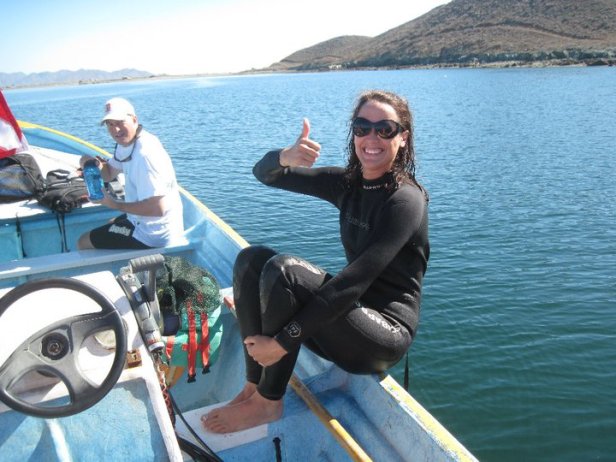 The field is fiercely competitive and often requires long hours for minimal pay, with few of the glamorous moments portrayed in the media. I encourage you to think outside the box–you may find that a merger of policy and science suits you, or that you have a unique passion for fisheries management or wildlife disease epidemiology. Gaining a variety of experiences will help you develop your passion and skill set.   So much work is done as a team-learn how to get along well with others, but be independent and reliable. Be thorough–listen to directions carefully, read everything you can get your hands on, and never forget to spell-check. Most importantly, be curious (don’t be afraid to ask questions) and look for the silver linings. There will always be days when you’re covered in bug bites, it rains, your lunch falls overboard, and the study animals aren’t present–keeping a good attitude (and a spare granola bar in your pocket) can make or break a field project.

I have been immensely fortunate to have spent time with the National Park Service through this position, but even more so to have found a fantastic team willing to mentor a new colleague. I have gained a better understanding of how the Department of the Interior and its bureaus, a newfound passion for increasing NPS stewardship and science in the field of marine conservation, and a creative mindset for exploring ways NPS can facilitate more efficient partnerships with other agencies, states, and NGOs.

The views and conclusions contained in this document are those of the authors and should not be interpreted as representing the opinions or policies of the U.S. Government. Mention of trade names or commercial products does not constitute their endorsement by the U.S. Government.