Washington, D.C. – Lawmakers increased science funding in part of a trillion dollar bill to fund the government through September 30, 2016.

The Omnibus Appropriations for Fiscal Year 2016 passed the House on December 18 with a vote of 316 to 113 – the vast majority of Democrats and over half of Republicans voted in favor of the legislation. The Senate then quickly approved the package, which President Obama signed into law that day.

“This legislation is our best option to responsibly meet national security requirements, improve our country’s infrastructure and address other public needs.  We’ve worked on a bipartisan basis to produce a bill that will make important investments to aid our economy and promote more effective and efficient government,” Thad Cochran (R-MS), Chairman of the Senate Committee on Appropriations, said in a statement.

“The Appropriations bills are good bills.  We considered thousands of items, and it took a lot of hard work and collegiality to get to where we are today,” Barbara Mikulski (D-MD), Ranking Member of the Senate Committee on Appropriations, said in a statement. 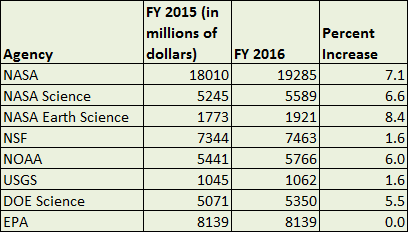 The overall science budget for the FY 2016 omnibus increased 6.6 percent over the FY 2015 budget. Planetary science received the largest increase in funding within the sciences – 13.4 percent – and earth science the second largest – 8.4 percent. Astrophysics gained 6.7 percent while heliophysics and the James Webb Space Telescope lost a few percentage points.

NSF’s 2016 funding increased by 1.6 percent over 2015, bringing its 2016 budget to $7.5 billion, according to the act. The funding allocates $6 billion for NSF’s research programs and $880 million for NSF’s education and training programs. “The bill does not include any restrictions to Geosciences funding, and funds Social, Behavioral, and Economic Sciences at the fiscal year 2015 level,” states a press release from Mikulski. NSF will develop a spending plan to allocate funding to each directorate.

The initial House bill included cuts to NSF’s geoscience research and restrictions on participation in climate change activities – neither made it into the omnibus.

NOAA’s 2016 funding increased by about 6 percent over 2015, bringing its 2016 budget to $5.8 billion. $3.5 billion is allocated for NOAA’s coastal, fisheries, marine, weather, satellite and other programs; and $500 million goes toward the National Ocean Service. The omnibus does not include the initial House bill’s restrictions on NOAA’s ocean activities, according to Mikulski’s press release. The bill upholds funding increases for the Geostationary Operational Environmental Satellite R-Series Program (GOES-R) and the Joint Polar Satellite System (JPSS) and provides is $370 million to initiate the Polar Follow-On (PFO) program.

The Office of Science’s funding increased by 5.6 percent, bringing its 2016 budget to $5.4 billion. Within the budget, $158 million is allocated to the exascale initiative; $77 million to the Argonne Leadership Computing Facility; $86 million to the National Energy Research Scientific Computing Center at Lawrence Berkeley National Laboratory; $10 million to the Computational Science Graduate Fellowship program; and $38 million for the Energy Science Network, according to the act.

2 thoughts on “Geologists Can Breathe a Sigh of Relief: Congress Passes Favorable Omnibus Appropriations for 2016”

Leave a Reply to Nazrul I. Khandaker Cancel reply